Okay, so we’re here with Nikka T. What got you started in the world of solventless extractions?

I grew up in Northern California, where water hash is extremely prevalent… but we were used to the black and brown, mildewy-smelling bubble hash that was prevalent in Humble and Mendocino County. I wanted to make something different, something that looked like the butane extracted hash that I was seeing, but made with just ice and water. 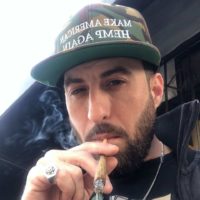 Is there anyone in the Cannabis industry that you highly admire, that you would put on a pedestal? Now or deceased?

So many people have come before me and set a trend and path for me to follow. People like Mila Jansen of Pollinator. I really put people like Scott from Rare Dankness on a pedestal and then people like Fletcher, from Archive Seed Bank, who brought a lot of the genetics out to the public first. I feel like there’s so many people to thank, I could keep going.

You know, really, I think it’s all about the trends that you see coming. Looking from the outsiders perspective, a lot of the hype starts in California for the Cannabis industry. When we first started the medical movement, dabs became really popular. When you try and dab water hash, especially old school hash or Moroccan hash, it leaves a lot of residue and it creates this like really burnt smell in the air because you’re burning a lot of waxes and plant residue. That turned a lot of people off from dabbing water hash but now that we’ve created different consistencies like rosin, we see a push of that envelope. We’re seeing rosin and solvents in general take a lot more of a seat in the industry compared to BHO or seeing it take like 30% of the market right now. It’s also a lot cheaper and quicker to start a solventless facility, a type 6 facility, in California, than it is to start a hydrocarbon facility, a type 7, in California. So a lot of people coming out of the gate in the new regulatory environment are coming out with solventless; it’s cheaper easier to produce.

What’s your favorite strain to extract?

I look for high yielding strains that have a particular terpene representation, and what I’m looking for in water hash specifically, is hard to find in strains that really make water hash viable. So when you find those high yielding strains in water hash, hold on to those. Some of my favorites have been Sour Banana Sherbert from DNA Genetics, it yields over 25 percent, every single time. It has this crazy banana, creamy sourness that is really desired and then newly there’s been some lime and lemon strains that really lean on the rind and that are actually yielding well. Previously, Lemon Tree and Lemon Juice yield poorly in water hash; now we’re finding some strains like the Lemon Bean actually yielding high in water hash. So some of those fruity terps are my favorite right now, those ones that have the citrus terps and still yield.

Where can people acquire your products legally?

We have some collaborations out there with Field Extracts. We also have a serum collaboration out there in collaboration with Inclusive Cannabis and our breddren Sean, Fallen Pollen. I’m building a big facility in California and Colorado as we speak and we’ll have our own products out in the those markets soon.

What’s an ideal smoking date for you? Paraphernalia, strain, place to smoke?

What are your favorite cannabis clubs in Barcelona City right now?

How is social media and Instagram affecting cannabis branding?

Well cannabis is still federally illegal, and Instagram is ran federally, as far as anyone’s concerned. So they’re knocking out a lot of the big cannabis companies deleting their accounts, and that makes it really hard to utilize it as a platform. However, Instagram has become the largest platform for us so we have to utilize it. I mean, I’ve been booted a number of times myself and going from 50,000 followers to a thousand, and rebuilding organically is hard on any company. 80% of our marketing is via free marketing on Instagram, so yeah, it is hard sometimes.

In which direction is solventless extraction methodology heading?

Making hash has come a long way… Well for me, starting in my uncle’s barn, a hot, humid barn on the property where we growing a lot of ganja, to five-ten years ago, when I was starting to build these temperature and humidity controlled labs to create this hash, to now, it´s been wild… Some of the consistencies that we’re seeing… some of the mechanical separation from the separation via temperature and pressure to create THC-A diamonds and terpene separations. So we’re only moving forward.

Can solventless extractions make for a good cartridge?

What are some of the best events that you’ve attended recently?

Man, you know I put Masters of Rosin on a pedestal …. the quality that HQ brings to the table when it comes to events is on another level and I really appreciate what they’ve done for the community and the industry out here in Spain. Spannabis in general this year was fucking lit. It was just that that much bigger this year than it was last year even and stateside, you know, High Times has been holding it together. I really like the events that Hitman Glass Dougie put on, but my favorite event is the Emerald Cup.

All right, what’s your favorite music to extract to?

What are some of the problems that you see with the current cannabis industry?

Working on a project in Northern California right now. I’m building a pretty large facility that’s going to house not only Essential Extracts, but a couple of my new companies we’re going to expand these Essential Edibles. We’re also going to be creating some C1-D1 facilities within our new lab for some hydrocarbon ventures. And more topicals, more cartridges.

Mobile version: Enabled
Back to top

Use the search box to find the product you are looking for.

No products in the cart.

This website uses cookies to improve your experience while you navigate through the website. Out of these, the cookies that are categorized as necessary are stored on your browser as they are essential for the working of basic functionalities of the website. We also use third-party cookies that help us analyze and understand how you use this website. These cookies will be stored in your browser only with your consent. You also have the option to opt-out of these cookies. But opting out of some of these cookies may affect your browsing experience.
Necessary Always Enabled
Necessary cookies are absolutely essential for the website to function properly. This category only includes cookies that ensures basic functionalities and security features of the website. These cookies do not store any personal information.
Non-necessary
Any cookies that may not be particularly necessary for the website to function and is used specifically to collect user personal data via analytics, ads, other embedded contents are termed as non-necessary cookies. It is mandatory to procure user consent prior to running these cookies on your website.
SAVE & ACCEPT